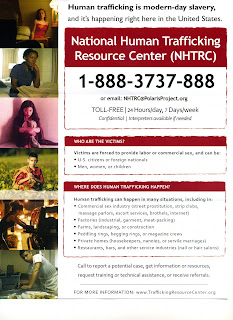 Human trafficking is modern day slavery, and it's happening right here in Washington, DC. But not without some pushback from local citizens. At a meeting organized by Olivia Morgan at the Cleveland Park police station, together with the Polaris Project, a presentation of the local problems with human trafficking and forced sex slavery right here in upper Northwest DC.

The illegal traffic in people is often hidden behind seemingly legitimate businesses. "I never thought about it until I started to learn about human trafficking. Then I looked around and wondered how this small strip of businesses in Cleveland park could support three nail salons," remarked one resident. Other business fronts include massage parlors.

Brad Myles of the Polaris Project "one of the largest anti-human trafficking organizations in the United States and Japan" according to their website, gave information about human trafficking in DC and what community members can do to stop it.

"Community tips are the best lead," Mr. Myles said. "This is not a crime of movement. It is a crime of denial of freedom and liberty."

Human trafficking victims don't know where they are, are not allowed to speak to others, are tense and hyper vigilant about things like getting home on time, they are not being paid, and someone always speaks for them, they are not allowed to speak for themselves. Often the victims live inside 24 hours a day and the windows are blocked so they can't see outside. And victims can be U.S. citizens.
Posted by Econo-Girl at Saturday, June 19, 2010